ORDRE reflects on a colourful CPFW SS'20, in conversation with Browns and MyTheresa

Flocking for both emerging and more established talents, Copenhagen Fashion Week is attracting an international audience of buyers. Just a few weeks ago Stockholm Fashion Week announced its sustainable closure, leaving CPFW to fly the flag for the broader Northern region. Buying director at Browns, Ida Petersson, hinted that the event is only just getting started, emphasising its newly branded “cult status”. She claims that the designers on her ones-to-watch list include Helmstedt, Self Cinema and Rotate which all have flourishing potential - the latter a brand which MyTheresa buying director Tiffany Hsu also has eyes for, “There were some very sexy but cool dresses at Rotate which will prove to be very successful” she reports.

Solidified as a street-style destination, the four-day-event was kryptonite for Instagram influencers, with a presentation of exaggerated silhouettes, vibrant hues and feminine aesthetics. An overall trend that proved to be all about carefully-curated maximalism. But the events optimism went beyond aesthetics, as Peterssen states, “CPFW is dedicated to leading innovation on sustainability which makes it stand out from the crowd.” Taking steps to be more sustainable: back in January 2019, CPFW enforced a strategy focused on four United Nations Sustainable Development Goals, including banning single use plastic bottles and putting standards in place for designers wishing to participate.

“The energy is always insane and their dedication to leading innovation on sustainability makes them stand out from the crowd.”

This season, some designers were recognised for incorporating sustainable ethics, from Stand Studio’s SS’20 capsule collection made from pineapple leaves to Holzweiler’s lambswool scarves made up of 60 per cent recycled wool.

One might predict CPFW to present chic monochrome and minimalism, but it has evolved to have a distinctly colourful aesthetic, whilst continuing its devotion to fine craft. If London’s known for a clash of experimentation, Copenhagen is defined by a clean concoction of pattern and colour. “The effortlessness of Danish design speaks to the fashion crowd today,” MyTheresa’s buying director Tiffany Hsu says of CPFW, explaining the appeal of having a mix of luxury houses and accessible contemporary pieces, “Most of the brands are very accessible and what is shown on the runway is very wearable.”

Here, ORDRE highlights the top trends to take away from CPFW SS’20 showcase, in conversation with MyTheresa and Browns.

CPFW street style is never short of an oversized blazer and short combination, and SS’20 saw a variety of elegant tailoring. “A hero piece in all collections was masculine suiting,” Hsu says, “The best iterations came from Ganni and Cecile’s white see-through version, that I fell madly in love with. And we will be buying into Stand Studio’s snakeskin suits.”

As the first show, Brøgger set the tone for a colourful week, injecting some vibrancy into Copenhagen’s grey skies. As Peterssen says, “It was a colourful season yet again, which becomes increasingly typical for the northern brands.”

Featuring both ends of the tonal spectrum, Hsu highlights that the trend was strong throughout various shows, “Cecile Bahnsen, Rotate and Ganni showed their collection in pinks, mints and pastel hues, while others like Stand Studio and Saks Potts based their colour palettes on more vibrant neon colours.”

Will fashion ever part ways with western trends? According to CPFW, not anytime soon: Peterssen reports back to ORDRE, “Cowboys boots were everywhere again. I’m obsessed, especially with the neon ones from Sunflower.” Ganni was another brand bringing rodeo romance into the SS’20 season, with Tsu spotlighting the snake print numbers as a potential best-selling style, available in a range of colours. 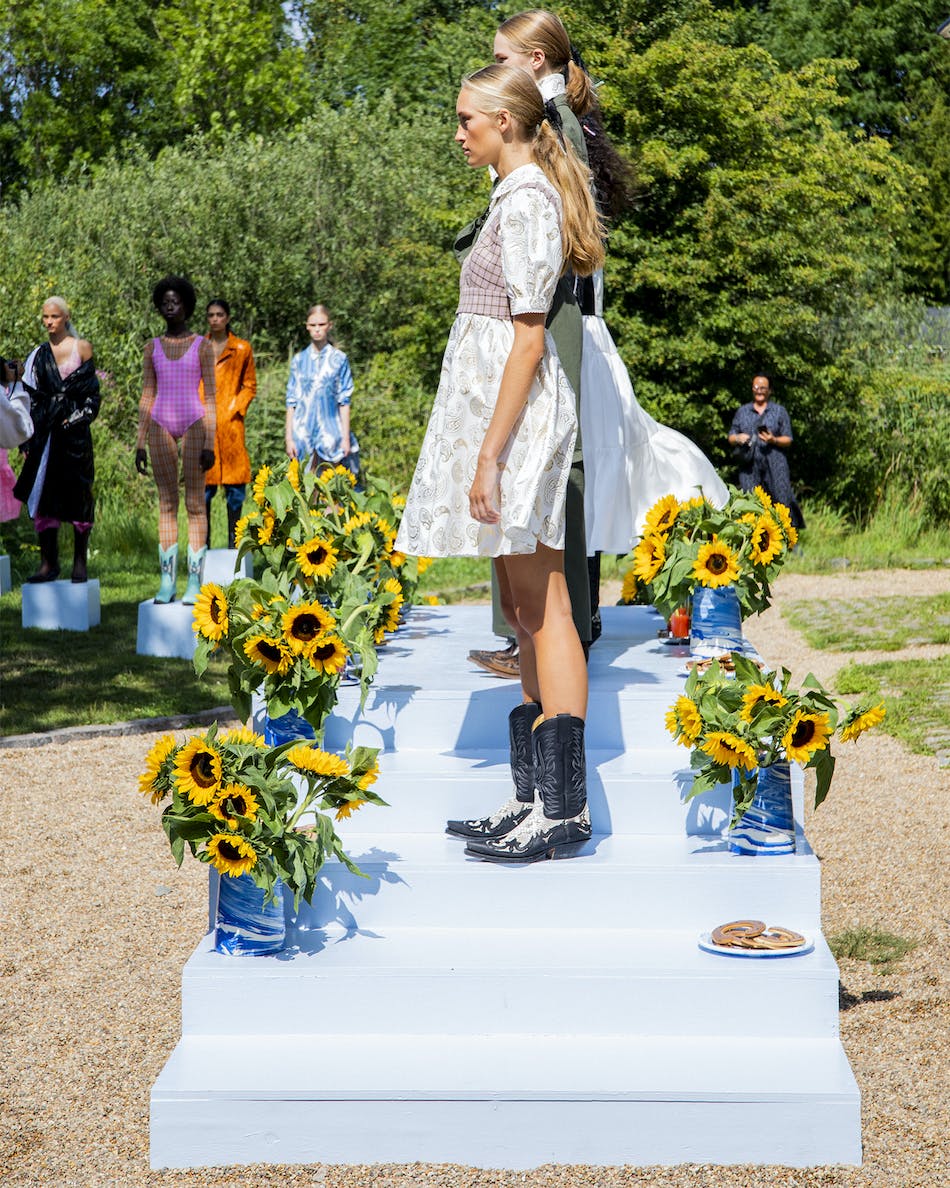