Dinner is booked for Xu, a Taiwanese restaurant and teahouse on Rupert Street, a culinary haven in London’s buzzing Soho area. They are running late but the waiter soon shows them to our secluded, wood-panelled spot behind plush curtains waiting to be drawn. Polite and apologetic for the lateness, Fyodor Podgorny and Golan Frydman, the designers, business partners and couple behind Fyodor Golan, are immediately chatty, candid and very likeable. 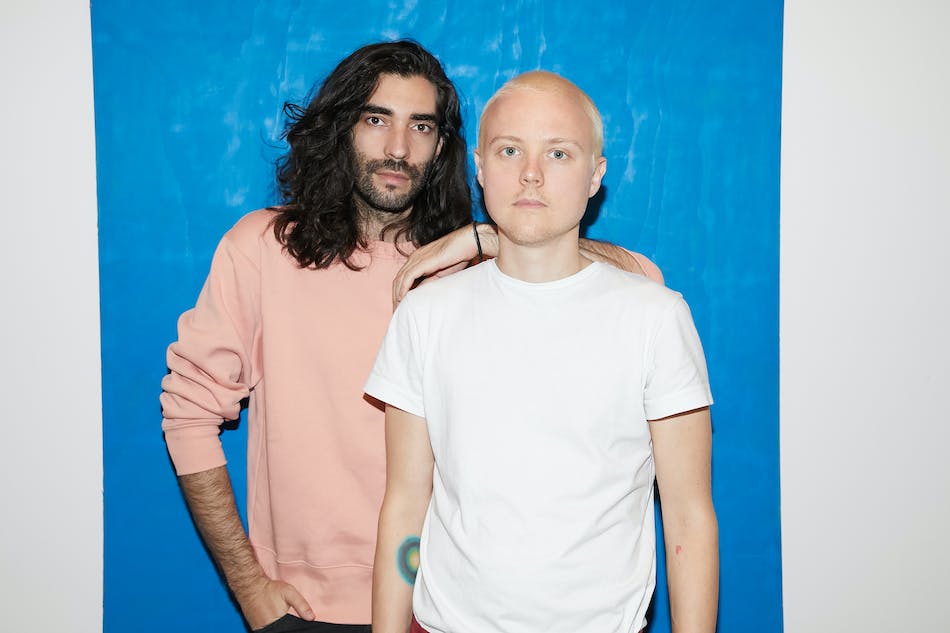 New to Taiwanese cuisine, we open up with talk of food which starts with the question, who does the cooking? “He does/I do!” they answer together. The “he” is Golan Frydman; “I cook. I don’t really have a signature dish though, it’s more emotional, and expressive. I was born in Israel, so you have inspiration from Africa and Middle East meaning in culinary terms, it’s very open.” Straight away we get to the very heart of the Fyodor Golan brand, based as it is on a receptive, mix-and-match aesthetic that makes it one of the more consistently adventurous, risk-taking brands on the London Fashion Week schedule.

Since 2011, their day-glo luxury sportswear and luxuriously off-kilter evening wear has struck a chord with the industry, resulting in a dedicated legion of fans scattered globally. But don’t be fooled, beneath the luminous, rainbow fabrics and paper-scissors look is a partnership based on a accomplished business acumen, fed by a certain brashness. This brash, can-do attitude that lies at the very heart of the brand seems to emanate most vocally from Israeli-born Frydman, who gets down to business after we order starters, mains and a bottle of Xu’s bespoke Riesling from Eva Fricke’s vineyard.

“When we wanted to get into Selfridges I went to see the director. I’ve always been going straight to the top, I don’t understand the concept of going to the assistant’s assistant. I think somehow my boldness works with people who are very high up,” he explains, matter-of-factly. It was the same with global retailer Harvey Nichols, apparently: “It was very early, it was our second season. We went straight to the buying director.” Excitedly, they recount how they didn’t even have a studio then (“we worked from a tiny bedsit,”) and with only one rail they still, rather impressively, managed to entice the retailers’ director to their PR at the time. The reason why it worked while countless other brands fail? “Well, we were already quite savy in the sense that we understood the market,” Podgorny surmises. “We knew what things cost, we didn’t go for the insane prices. We didn’t go to like £3,000 for things.” 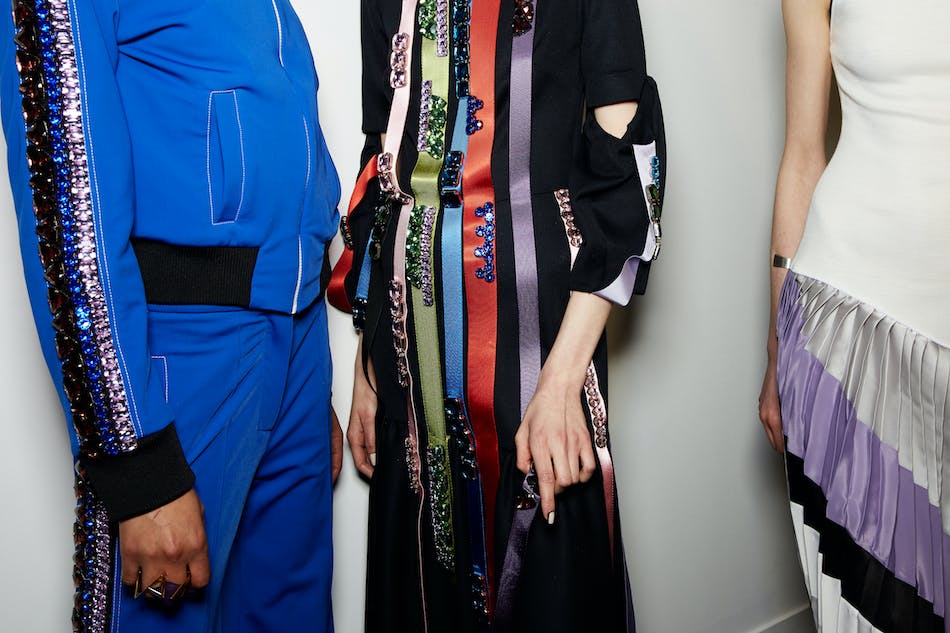 They attribute this intuitive grasp of the market (and why they got picked up in such an embryonic stage), to their time in retail. “I knew the customer! I knew her because I served her. I hung out with her,” Frydman says passionately as the starters arrive (they share sweet potato taro dumplings.) “But a lot of my contemporaries at fashion school had no idea about the person who wears fashion. They knew all too well the aspirational side but they didn’t personally know the woman who walks the designer floor in Harveys.” Podgorny adds pragmatically, “It was also the quality of the finish on our garments. There has to be a certain level of finish. Don’t forget you sit on the same floor where you have Alexander McQueen.”

Which brings us to Farringdon. Falling in love with the area when he worked at Alexander McQueen, it was Frydman who insisted they move there. They now live and work in the area, having moved out of their studio at Somerset House (home to the BFC) to the decidedly unfashionable area following recent investment from Eiesha Bharti Pasricha in January. “We like being slightly away from things happening in fashion, it has to be its own language. I don’t want to be in a cool area,” Fyodor Podgorny explains, referring no doubt to the legion of brands populating East London or the increasing number of designers taking up residency at Somerset House.

“We like having our independence. While hubs are very fashionable right now, they’re not us. It was important that we were the only fashion company in the building,” Frydman adds. This sense of purposeful detachment permeates all aspects of their life, business and personal. “We are individualists in the age of community. We are constantly finding ourselves in this wave and find our feet and see how our individualist approach fits into this wider, societal context,” he continues.

“We are individualists in the age of community. We are constantly finding ourselves in this wave and find our feet and see how our individualist approach fits into this wider, societal context”

Relocating the studio to Farringdon means they are away from the fashion set, but also that they can walk to work — after Podgorny walks Dash, their larger-than-life Scottish deer hound, that is. Neighbouring Zaha Hadid’s office (housed in a former girls school,) their home is located in the school’s gym converted into a showroom, an office and an apartment. “It’s amazing at the weeknds, it’s just empty streets. It feels like we own the street. Us with our dog. Incredible.” Their home, as you might imagine, is just like the brand: natural and unnatural materials create what they call “neon DIY.”

As the mains arrive (chicken with drippings for Podgorny and seabass for Frydman), I’m aware that this “neon DIY” is a direct contrast to the collected calm of where we sit. Podgorny’s eye for detail and colour is openly evident as he unexpectedly laughs: “Everything here is slightly green! Isn’t it? The plates, even the wine looks a bit green?” Podgorny’s keen eye in used about the house too — Frydman makes while Podgorny decorates: “I’m good with my hands, I build, I cook, I do that sort of thing and he’s the decorator. I build massive bookshelves and he’ll come along and fill them.” Their personalities create a unique blend of contrasts, an area where their clothing thrives (unique and unexpected fabrication combinations such as PVC and hand crochet.) Born in Latvia, (where they sourced granny’s to hand-crochet on mass for aforementioned PVC trousers), Podgorny’s soft touch and cherubic looks make him the perfect counter for Frydman’s directness. “Being together has definitely given us strength. It’s keeping us grounded, a lot of successes are coming from these partnerships,” he says.

And while they are certainly successful now, they pinpoint the SS15 Press Play collection as their turning point. Frydman’s recalls getting that phone call in Tesco (“literally it was Tesco”) to say the bidding war, and their fashion fairytale, had begun — after which which they began to make their mark globally (they now have 30 international stockists including I.T., SKP, Harvey Nichols, Harrods, Excelsior and Hanwha Galleria.) On the latter, they add that Korea is their next big focus. 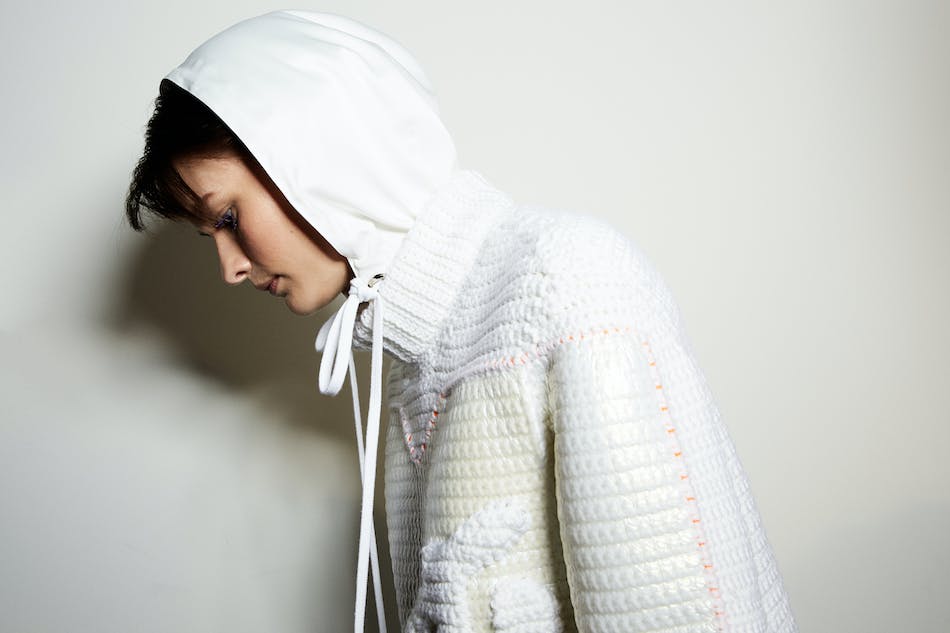 According to Frydman, “We’ve hit a nice note in China and now it’s about being discovered slowly by all the soundings. It’s very clear that the design, the aesthetics and the brand language is really suitable for the Korean market, it’s really what they’re after. We are in the two most important places there so the market is nicely rounded.” “Actually, this is something about our brand in general,” Podgorny chips in eager to make his point. “It’s rounded, it’s not just for the cool girl or the lady, it’s got the full spectrum. And, we’ve been always operating like this from the beginning.”

It’s this connection with the client, one guesses from the early retail days, that ensures the brand attracts, and most importantly retains, their customer. “I think a lot of designers struggle to imagine their customer picking up their kids from school or seeing their customer with her kids, because they don’t actually know them personally. Whereas, we made very strong friendships with our customers. We’ve been to their homes.” Sometimes it was fabulous environments and they were picked up in their Bentley's and sometimes it was really simple places but they say it makes them face the reality that the person who buys fashion is a real person. “A real life person! It’s scary but it’s liberating as a designer because you suddenly get to break your old fantasies that a woman who goes into a department store, buying her clothes, is some sort of unreachable person,” Frydman points out, conceding they still often check orders and send thank-you notes to customers.

“A real life person! It’s scary but liberating as a designer because you get to break your fantasies that a woman who goes into a store is an unreachable person”

Over aperitives of an old-fashioned for Podgorny (who wanted the cocktail even before the starters but politely held off) and plum sake for Frydman, we discuss everything from the popularity of the FG sweater (“we could make so much money just from selling sweatshirts — it’s a serious business driver”) to how technology impacts their business (“it makes us design in a purpose driven way, rather than an abstract way. It has a purpose, which is grounding”). And politics, of course. “How do we, as a positive brand — I mean we can’t be blind to things at the moment, times are tough, but how do we as intelligent people — have this conversation without taking out the mainstay of the brand which is positive and empowerment through positivity?” Frydman asks, echoed by Podgorny, who adds: “It’s about you, and your influence. It’s not about being heavy, it’s about turning it around to what can I do?”

When probed about this upcoming season they are coy, but with a host of unlikely collaborations under their belt (from My Little Pony to Post-Its) this season’s announcement is likely to be another explosion of riotous colour, and life-affirming fun of course. “You won’t be expecting what we have in store for you this season. It’s going to be amazing!” teases Frydman. And with that, the night is over. He lights up a cigarette, his last, and they depart, leaving me to conjure up what they could possibly be planning for London Fashion Week.