Frances Card, luxury fashion consultant, talks to ORDRE about the importance of service in retail and calls for a change in buying habits.

Luxury fashion and retail consultant, Frances Card, is fashionably late for our six course tasting menu at The Clove Club, in London’s fashion alcove, Shoreditch. She arrives in a flurry of coats and scarves, and is instantly personable as we settle in to our place at the counter, in close proximity to the attentive bartenders. Card, with a range of clients from MatchesFashion, Farfetch and Liberty to Amanda Wakeley, Maria Grachvogel and Tusting, is no stranger to retail. Eager to get down to business quickly, she turns talk to Browns East, the “store of the future” situated around the corner — a project on which she consulted.

“I work with Farfetch (which acquired Browns) on various projects and one of them was to do with that store,” she says as we take in the menu with before-and-after accompaniments. “Their investment in staff is the most amazing thing. I did the job description for the person who would run the store and it was really interesting.” Just as she’s about to explain the store’s manager role — what she identified as more of an M.C/ host — she excitedly digresses to tell me about the chef, (“he has a big thing about Ireland.”) Card is a big fan of the Michelin-starred Clove Club, ranked 33 in the world’s best restaurants, proclaiming: “I love it!” as we make wine selections. Although Card clearly knows what she wants, she listens attentively to the suggestions from our helpful sommelier (“something not overly aromatic or floral”) and we settle on a Spanish Albarino.

“I’m very pleased that our industry is now understanding that retail is a vocation.”

We quickly fall back into conversation as our pre-starters, including a crab tart with devilled spices and smoked eel cracker, arrive. “That’s it, it is the store of the future,” she explains. “My work for Farfetch is across a wide spectrum of projects, I work for Sandrine Deveaux who is at the helm of their retail innovation vision, which is essentially this concept. When we talked about the store manager role… well they are actually hosts, right?” she asks. “The clients coming in are not clients, it’s more than that, and you need to make it theatrical.” With an accomplished list of roles now under her belt (Card started her career in buying at Dickens and Jones,) and given her longevity at the cutting edge of retail, she clearly knows what makes the industry tick.

“I’m very pleased that our industry is now going back to understanding that retail is a vocation,” she says adding, “Not in the sense of a doctor or that type of caring profession, but in another way. These are the people who are on the front line or behind the scenes so it’s an important thing for any retailer to teach their staff the importance of service, it makes or breaks the industry.”

As our various plates arrive, from cured mackerel with wild seaweeds, to cornish monkfish, she continues passionately, “When I was a director at Liberty, I always said that the person who stands at the front door, or even opens the front door, is often more important than the people sitting in the boardroom who make plans. If the door doesn’t open and the sales team aren’t there, then you have nothing.” She continues that they need to be completely committed to making the public happy — in whatever way: “These people are the shop window of our industry — or even if they are doing service online — its a real skill making people feel happy.” And given the unprecedented amount of choice in the industry, service is one vital factor that can translate directly into sales. 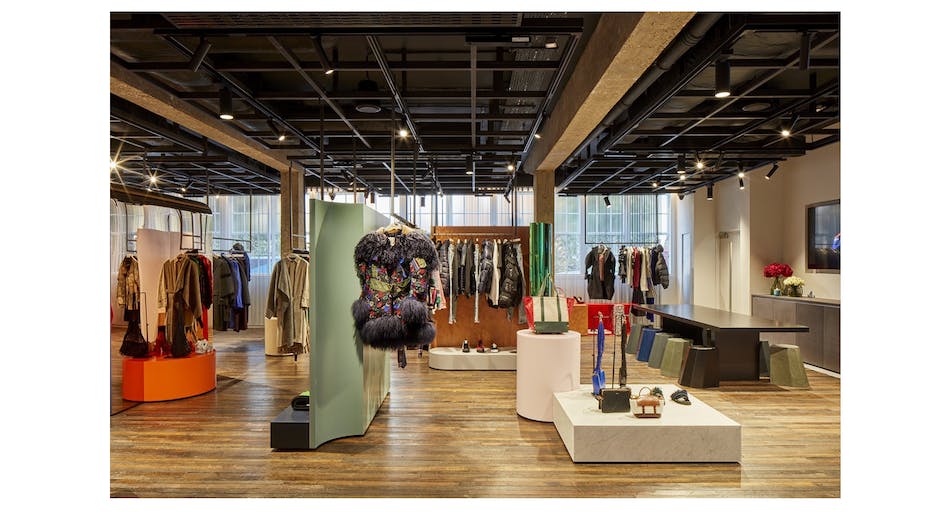 “Look, we have so many choices now… we can choose by brand but also by service, and we’d all rather choose nice service over the coolest store.” As our main of slow roast hebridean lamb with kale arrives, she puts forward the Nike store in New York as an archetype of where every store should be heading: “They’ve moved one step further, they take you to where you want to go within the store, and leave choices to the dressing room, they essentially help you on the journey.” We also talk AI in China, and how integrating tech can facilitate service. “Are we going to have an Alexa in every store? I mean — it’s a thought. Who knew we’d do it first in our homes, so why not do it in stores?”

As we take a breather before our selection of desserts, it is obvious that Card, like everyone else, is trying to foresee where the industry will go. However she, for one, is still banking on human interaction to generate sales. “You know, I went to a major brand event very recently in Mayfair and I did not have the best experience,” she says disappointedly. “And then I went to a smaller store and it was such a different atmosphere. They wanted to talk...they knew about the brands and everyone was carrying a retail bag. That’s service right there when you see the bag. You can walk up and down Bond Street and see what bags are being carried and that’s such a strong indication of where the industry is now.”

“Walk up Bond Street and see what bags are being carried — that’s a strong indication of where the industry is now.”

The deserts though light are plentiful (organic apple tarte tatin, homemade chocolates, bonbons and peated barley cake) there are simply too many to finish and Card refrains entirely. Given she has changed gear recently, moving from some of the city’s most vibrant hotspots (including Covent Garden) for five years, and then Portman Place to Belsize Park (“with the squirrels and bluebells”), it seems logical that she is also now advocating for a change in our consumption. “Our buying patterns have to change...we aren’t quite ready to do it now, but it will happen. The industry needs to catch up to the rest of the world.”

As we wind the evening down, talk turns to trends, and what is really driving fashion currently. “It’s not always dictated by luxury anymore,” she says. “Like in the past, now it’s much more about the consumer. It’s about the public using social media.” The best example of this was seen recently during the Dolce & Gabbana debacle in China. “It’s them not being sensitive to the market and it was a real misjudgement.” As we are putting our coats to brave the weather she says thoughtfully: “We can’t be dictatorial again...we have to listen to culture, to music, food, interiors… to everything that’s going on in the world to build brands.” And with that she is gone.