Since graduating from Central Saint Martins (CSM) last year, womenswear designer Patrick McDowell has fronted the cover of ELLE UK and Mexico, dressed Rita Ora in a range of looks and secured a place on the sustainable-focused schedule of Helsinki fashion week 2019 - and that’s just the tip of the iceberg. His career has launched full speed from the get-go.

Garnering a star-studded clientele, he’s also dressed M.I.A, Sinead Burke and rising American singer Hayley Kiyoko. “I found that a lot of the celebrities I have dressed are trying to find that mix of glamour and fun. I never realised how well my clothes would work on stage,” McDowell says. The avant-garde elegance of his pieces have an immediate star quality, think cocoon-like, layered coats, bold hues and statement silhouettes.

“I found that a lot of the celebrities I have dressed are trying to find that mix of glamour and fun. I never realised how well my clothes would work on stage”

Born-and-raised in Liverpool, McDowell's eponymous label merges scouse glamour with his father’s profession in public services, producing glamorous utility-wear. But beyond his aesthetic, McDowell is becoming recognised as a kind of ever-green activist in the industry, from running a workshop at Fashion Revolution Week to getting spotlighted in Vogue. His ethos is ‘making beautiful clothing that doesn’t cost the earth’, upcycling fabrics and using ethically-sourced materials.

“My latest collection is mostly made from beautiful, studio-waste Burberry fabric.” McDowell says. The luxury house was exposed for burning over £28m of fashion and cosmetic products last year; after interning there the young designer asked Christopher Bailey if he could use surplus fabric and of course, he enthusiastically agreed.

The green brand ethos also entails padding made from plastic bottles, organic Wool and the Gang yarns and unsellable Swarovski crystals. His efforts don’t stop there, though: “I’ve actually used some of my last collection to create this new one. I feel that they’ve lived their life, so I took them apart and remade them.”

McDowell’s launched at the perfect time with the rental industry growing rapidly, as his clothes are currently only available to rent - this also means the real luxury of his clothes has become time, “because if you don’t rent it now then you might never be able to. It’ll soon transform into something else,” he says.

Although McDowell ponders on a future wholesale plan, if it can be arranged sustainably, at the moment he only produces one of everything, and his label caught the eye of luxury rental platform Higher Studio. Sara Arnold, the founder, describes to ORDRE why she chose it: “The items are well made and sustainable but don’t fall into the aesthetic clichés of eco-fashion. For me, though, it’s really important to know that Patrick designs with care and integrity. Ultimately, we need a culture that cares about the resources we use.”

Despite being labelled as womenswear, McDowell designs for whoever wants to wear his clothes. At Higher Studio, this is reflected in his broad customer-base, Arnold reveals, “The best-seller is a very voluminous red silk dress. It’s able to span several sizes and can be adapted to different styles, so has been worn by a range of customers, from a content strategist in her late twenties to someone in their mid 40s working in fashion.”

All of McDowell’s garments sell at a luxury price point, with his jackets priced at around £2000 to buy, whereas his accessories, Swarovski crystal-embellished bags, are more accessible at £150-400. These were sold at a Harvey Nicholls pop-up with Maya Collective, and for a period of time in Italy at Fidenza Village. He discloses, “I have got some new bags coming out with my collection at Helsinki fashion week, so I’d love to sell them at a pop-up again, so we’ll see.”

The young designer appears to be calm for someone who’s showing for the first time in three weeks. But it’s clear that McDowell isn’t just an emerging designer, he’s a businessman, from his endless list of collaborators to his various projects on the horizon - he’s presenting his collection at Venice fashion week and doing a panel whilst he’s there too. He also mentions a prospective workshop in the Middle East, “They’re so glamorous over there, so I think that it could be a great potential market.” he says.

“I’m excited to see how the Nordic taste receives my work in Helsinki, though, as it’s known for being quite minimalist. Although, I am showing at London Fashion Week in the positive fashion showrooms for the British Fashion Council in September too.” McDowell continues, relaxed and driven; it'll all be revealed when his 'Firefighting Aunties' collection debuts on 20th July. 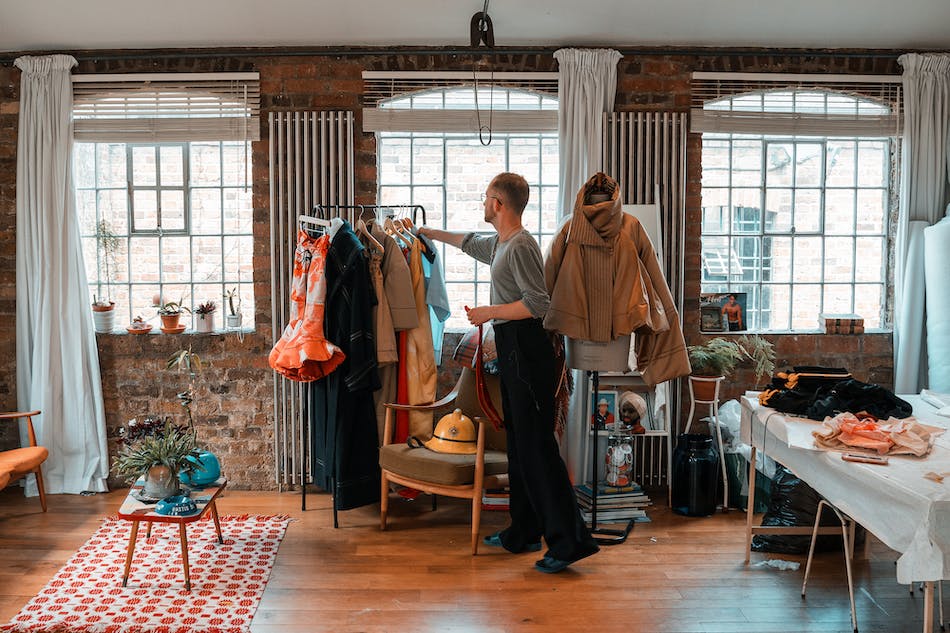