ORDRE has dinner with Chinese fashion entrepreneur Yuan Yuan Jin to discuss her pioneering creative agency YYO and how she cultivates visual communication in retail.

A pillar of the Chinese fashion landscape, Yuan Yuan Jin, founder of creative agency YYO, has been working tirelessly on the mainland to bridge gaps in a fast-changing, dynamic retail industry. We meet at an extremely festive and busy Soho House, Dean Street — where she is a global member. “Well last year I was only in the houses a handful of times,” she laughs, “But it’s still worth it!”

Jin was born in Zheng Zhou, the capital city of Henan Province, and has been living in Shanghai, a “cosmopolitan city with a mixed culture and international lifestyle,” since September 2004. Educated in the London College of Fashion, she frequently travels globally and uses Soho House venues around the world. “When I was in Turkey shooting for a Chinese brand I stayed at the one in Istanbul and it was incredible…We need one in Shanghai! It’s the new WeWork!”

As we look over the menu, she is bubbly and excited to be back in London. In fact, her company is opening an office in the capital next year and Jin is scouting for locations (in the WC2 postcode). “Places like Soho House are great to work from but now it’s time for a London base. I’m ready to make the leap,” she says while choosing a carafe of Lady A rosé. Jin established YYO in 2005, the first artist management and premier photo agency of its kind in China, producing work with world class photographers such as Annie Leibovitz and Mario Testino, as well as local talents. “It’s still independent,” she says proudly. Her definition of success is not based on figures but to is to work with “like-minded people” - especially with what she terms “the super-powered young Chinese talents.”

Full of chat, Jin excitedly bats a continuous stream of waiters away. She gets very subtly chastised by a passing maitre d’ for attempting to take a selfie and eventually we order dishes to share - “Chinese style”, naturally. With members clubs on the rise globally, getting busier and less individual, Soho House still manages to offer something that touches on the unique - and even appeals to the sophisticated Chinese travellers such as Jin. From the eclectic menu, we opt for devonshire crab with mango and lime; burnt aubergine with chilli; alongside mains of wild seabass and fennel, and swaledale lamb chops with broccoli rice. 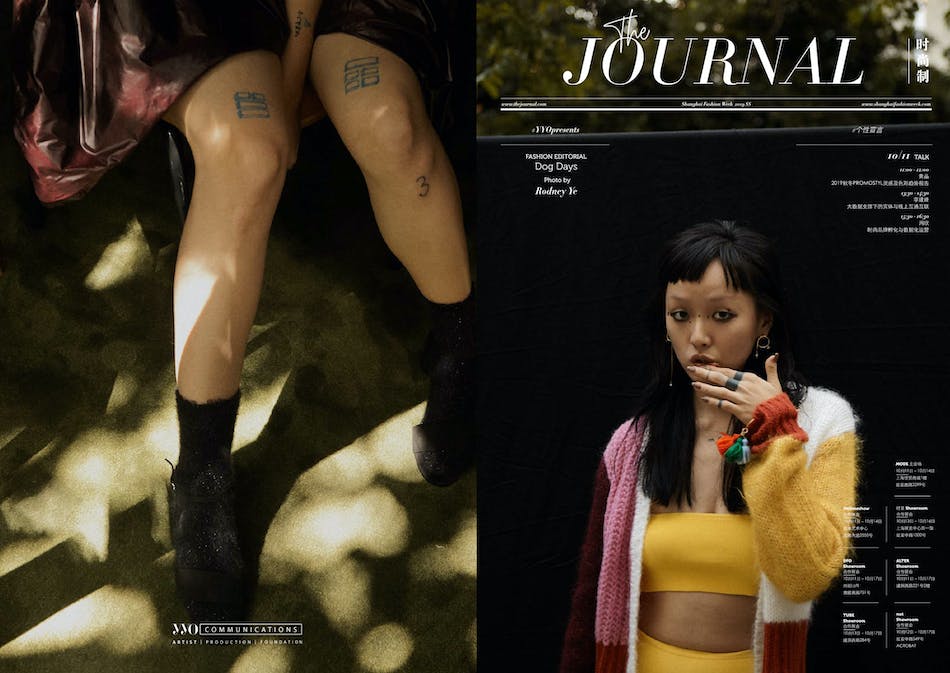 Back to business. “China, Japan and Korea - we are really ahead of the game,” she says. “Sometimes I feel like the trendy Chinese are leading the European fashion houses!” Jin is passionate about the promotion of these young talents - which have expanded to include djs and presenters - and continues to mentor creatives even after they move on to other ventures. The agency itself has an impressive roster, working with clients across luxury fashion and lifestyle, producing editorials and campaigns that feature in Vogue, T magazine and Elle, among others. It has worked with Alexander Wang, Dior Beauty and Sankuanz - a superbrand from Xiamen. For the last five years, YYO has also been a partner of Shanghai Fashion Week and produces The Journal, an industry bi-annual magazine in collaboration with the fashion week, focused on supporting the ecosystem from designers to showrooms, manufacturers and retailers.

She has recently moved into the big league of luxury retailers working with the likes of Kerry Centre and Taikoo Hui; she recently produced the ad campaign for Xintiandi. “The future of retail is going to be more cultural experiences,” she says of her recent exhibition at Kerry Centre targeted at young retail consumers. “It’s going to have to support emotional shopping behaviours... Personal identity, lifestyle and community are the main focus areas for younger generations.” Speaking of lifestyle, she is also in the UK meet one of her clients, F1, to discuss the new F1 Fun Festival in 2019.

I ask her about a phrase she mentioned during Shanghai Fashion Week: “Visual communication for retail.” Jin smiles and explains: “The retail landscape in China is unique. We have the best combination of retail sceneries in the world...This goes all the way from American style of shopping malls, to Japanese style of department stores, plus the European style of boutiques as well as selective buyers stores. This is quite a choice. Plus we have this massive online world: Tmall, Taobao, JD.com and so on… In China, the number one habit for every family is shopping! Can you believe it?”

Is this why is China so pioneering in retail? “Yes! It’s the impact of young Chinese consumers - they are leading the trends of fashion retail,” she says. “It’s about different methods of influencing, being inspired, and not only because the strong shopping habits, but also because we have this unlimited desire and demand and for next and new! But, brands all want sales and we help them understand how to attract a new consumer.”

“The retail landscape in China is unique - we have the best combination of retail sceneries in the world. ”

As our courses start to arrive, Jin recounts how the last time she was here, she had the plates arrive at the same time and they almost cascaded off the table (“they weren’t designed for Chinese-dining”) so this time we share course by course. The accomplished entrepreneur goes on to explains that in less than 20 years the industry has changed dramatically on the mainland. “The biggest differences now are more and more young talents are coming back to China after an education overseas (and I’m very happy for this!)” she says. “But, what we do at YYO, alongside these returning talents, is a form of visual branding. Visual retail is increasingly focused on brand communication - or how they convey their values. But we also help consumers understand a brand’s DNA. We use visuals to connect them to a brand’s culture.”

In real terms, she says this equates to point of sale materials and in-store advertising, billboards, as well as lookbooks, catalogs, packaging and all online communication. Plus, digital films in retail space, or moving images in multimedia format. Why is this important? “Basically, we can take care of brand image and B2C communication which increases consumer targeting. And this means sales…” she trails off with the shadow of a grin. “I believe that the future of retail is based on community culture, consumption and experiences sharing. We love to share in China — everything from food to retail tips. It’s just in our DNA.”

We decline on the deserts as Jin wants to check out the roof space for some crisp London air. As we get our coats and prepare to say goodnight, she adds, “I’m very lucky. I love living in Shanghai, it’s a great city where I have quite a spacious studio with a team of young, very happy creatives. But, I’m also able to travel around the world and create and produce brand stories - and make new friends along the way - and what could be better? We are building our own China.”

Alexander Wang on Creativity and Storytelling