Rome is nothing if not steeped in history. This season, Rome’s annual fashion week, Altaroma, took place amid the stunning sets of the iconic Cinecittá Studios, the largest cinema studio is Europe. As the so-called Cinema City undergoes what many consider a symbolic rebirth (courtesy of a €60 million investment from the government), can Rome’s fashion industry be similarly inspired?

“This city has a very different position to Milan, which is about who has already made it,” explains Aureliano Quattrone, a freelance stylist living in Milan, who travelled to Rome for the event. Herein lies the ongoing struggle for Rome. Domestically, competing with Milan is challenging enough. When considering its position within the global fashion landscape, can Rome really claim to be a hub for emerging talent?

One initiative, which has already launched talents like Marco De Vincenzo, Stella Jean, MSGM, is the scouting platform Who Is On Next? organised by Altaroma and Vogue Italia. “It is trying to make a connection with the young designers because there is really no single platform for young designers in Italy,” says Quattrone, amid the surreal outdoor backdrop of sets and replica buildings. “In Milan you need to be huge but Altaroma and Who Is On Next? are trying to take care of the smaller end.” 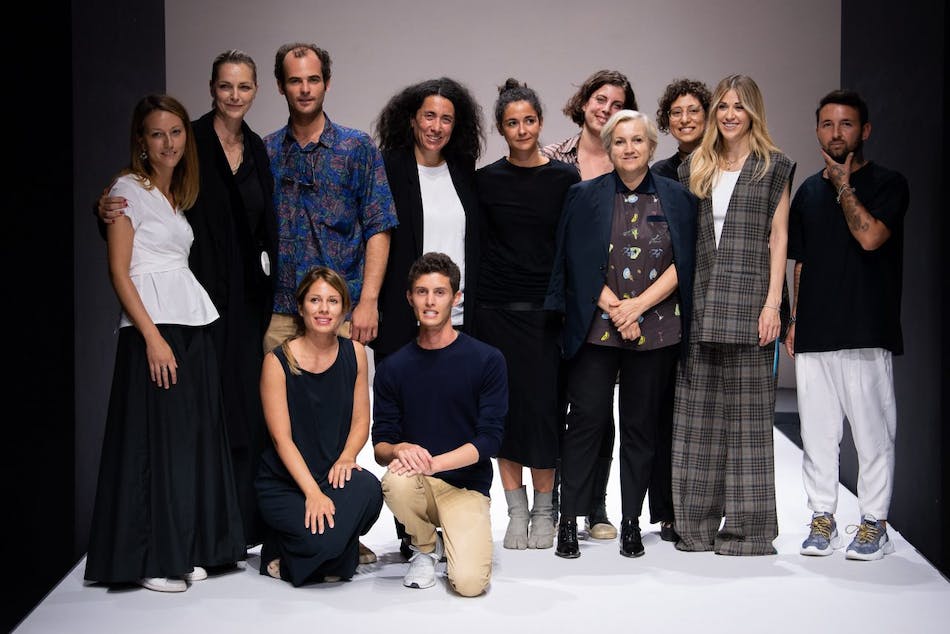 Who Is On Next award winners / G.Palma and Luca Sorrentino

Deloitte’s Global Powers of Luxury Goods 2017: The New Luxury Consumer Report confirms that Italy is a global leader in fashion — home to the greatest number of fast-growing luxury goods companies in FY2015. Unlike in other cities, what differentiates Rome’s platform globally is that talent is watched and deliberately nurtured over time, rather than instantly propelled into the spotlight. In light of this storied fashion history, perhaps it’s no surprise the initiative’s Franca Sozzani Award went to two brands who have been building their companies for a number of years already.

“My brand is 7 years old,” says joint-winner Maria Turri of MTF, after her post-win tears. “Everything is handmade by me,” she adds of her 12 piece SS ‘19 collection. Her love of geometric lines and hand-sewn finishes is reflected in the controlled line-up of anti-fashion, apocalyptic garments in black and white with pops of red and beige. A show standout finished with a bow-tied back detail, calling to mind classical simplicity.

“This is our first time here, and it’s very inspiring,” Turri says excitedly. “This is one of the best starts I can have!” Her philosophical leanings (Primo Levi and Dostoevsky quotes in the show notes) suggest a sincere talent, ahead of the curve and surely worth watching to maturation.

On the other end of the spectrum, MRZ, helmed by Simona Marziali, comes from a family with 40 years experience in knitwear manufacturing. “I created my first collection in 2012 and over the course of that year I launched myself with the help of the showroom Tomorrow,” Marziali gushes. Inspired by vintage plane tickets, the collection took the audience on a journey via elongated, sloughy silhouettes and paired back sportswear-infused pieces accessorised with oversized, origami bags.

“The combination of fashion, art and cinema in Rome all live perfectly integrated with each other to create our unique aesthetic”

Marziali graduated from the Accademia Koefia in Rome and has lived in the city for five years. “Rome is a very important place for me. With Vogue’s support it is an important window to the world,” she says. But despite her prowess in sales (“I now have 130 stores across Italy”) she concedes the importance winning by adding, “But I need this to give visibility to my brand, to move to the next level.”

Rome’s local industry includes clothing, leather goods and textile manufacturing. According to the Chamber of Commerce, in March 2018 there were 3,215 companies registered in the capital, with clothing the most popular. Over 90 percent of these companies have less than 10 employees. Infocamerce data also shows that the value of exports of the Roman fashion system in 2017 totalled €670 million, €115 million more than the value of 2016, an increase of 20.8 percent.

Sara Sozzani Maino, deputy editor-in-chief of Vogue Italia and head of Vogue Talents, who is responsible for growing the Who Is On Next? platform into what it is today, explains why she supports the event: “Rome is such a beautiful and historic city,” she says. “Before, it was just known for classic couture Italian designers and I think now it’s more interesting as it’s become a hub for supporting the new generation.

“It’s very important that the institutions like Alta Roma, the Chamber of Commerce and Pitti Immagine all come together to support this. It makes Rome interesting and different from Milan, and I think this is fundamental. It’s not easy because Rome is the political capital and it has support, but it should have more,” she adds.

Simonetta Gianfelici, head of project and talent scout for Altaroma since 2005, attributes the importance of education and culture to the success of the city. “The ecosystem of fashion in Rome is nurtured by the presence of our great fashion academies that are becoming increasingly more international,” she tells ORDRE. “They teach great traditions of craftsmanship, and are all still very vital thanks to the commitment of contemporary designers. The combination of fashion, art and cinema in Rome all live perfectly integrated with each other to create our unique aesthetic.”

“In Rome there is an opportunity for people to understand Italian design from a different perspective.”

Lupo Lanzara, deputy chairman of the Accademia Costume & Moda also believes that it is this “contamination of approaches — culture and competence” that is bringing schools to international attention. His family-oriented approach to education chimes nicely with the fact that Deloitte’s report highlights this too: Italy's predominantly family-owned luxury goods companies are smaller on average than the rest of its Top 100.

Alongside the Vogue platform and runways onsite, Altaroma affords educational facilities the opportunity to present student work during the event. “It’s all about quality for us,” attests Lanzara, “In the last years we have built strong relations with the Italian manufacturing industry spread in all Italian districts and international fashion houses.”

Altaroma also features Showcase, run in collaboration with ICE, which promotes Italian businesses abroad, and installations from the A.I. Artisanal Intelligence platform A.I. - Reaction. “Fashion fairs here are going downhill a bit and are also very expensive, so we prefer the curation of content here,” says Sheila Pierobon one half of Woobag nominated in the accessories division. “Here at Who Is On Next?, it’s just for [emerging] talents, while in Milan you have a lot of competitors who are already established.” 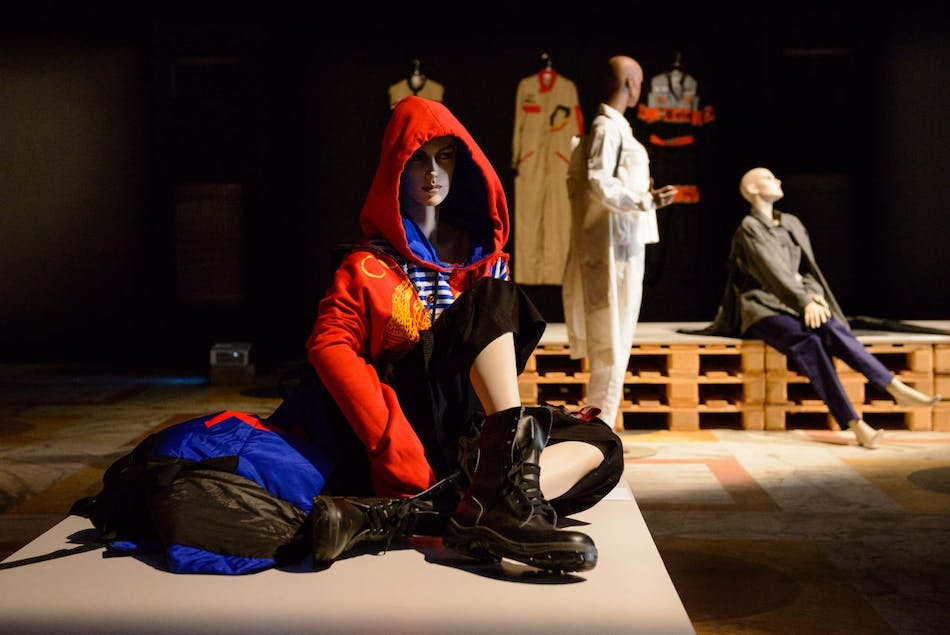 The guest list includes a range of buyers and retailers selected globally; Nikolay Dvornikov, buyer and managing director for Russia’s Soho Shop believes it’s an event not to be missed: “Especially to see the last day fashion shows — in particular, the Who Is On Next? Platform,” he says. “I think this is one of the best fair shows on the calendar to really showcase what is happening in the country right now.” Dvornikov goes on to paint Rome as a mecca for the young Italian creatives who want to communicate their vision and technical skills. “These are the talents who will go on to populate the show schedules around the world so it's quite important to keep an eye on them.”

Japanese talent scout and department manager Endo Daisuke-Millife, from import company Marubeni Europe plc comes to the event on behalf of his clients including Beams, Tomorrowland and United Arrows. “I come here to find new brands,” he says. “We function as an importer but also keep our multi-brand stores informed on new brands in each country.

“Our clients are constantly looking for new brands and products all over the world to differentiate themselves from products of other shops,” he continues. “In order to respond to this, we need to visit various exhibitions and shows, and we find the quality here particularly strong.”

With strong global attention, it is little wonder that Italy is a thriving market for mergers and acquisitions, according to PwC’s 2017 report. In the fashion and luxury sector, there were 34 deals last year, with mid-sized brands most appealing to investors. 76% of finalised transactions resulted in a 50 percent or higher stake taken. Marco Lanero, of Delirious — an eyewear brand — picked up the Tomorrow Award from Alfredo Canducci Pais Ferreira, executive director of strategy and development at the global multiservice business.

“We decided to take this brand because it’s fresh and new, it’s really close to the music environment, which complements fashion so well now,” says Ferreira. “This is an opportunity for young designers and new talents to accelerate their brands, and have the opportunity to have different kinds of visibility in terms of marketing and sales.” After the award, Lanero was quick to highlight Silvia Venturini Fendi’s efforts to support the city’s fashion ecosystem: “She is really the owner of this project, she believes in the capital and through her efforts she is moving fashion from Milan to Rome, in a big way.”

Maino is happy to point out that the winners all represented distinctive aspects of Italian fashion. “It was interesting how it turned out,” she says. “MRZ is about the family, history and tradition and the other two (MTF and Delirious) are artisanal, Italian handmade and maybe slow-fashion, which right now you don’t really have so much. I think it’s the two ways of seeing Italian ‘made in Italy.’ It’s two different worlds and it’s a very beautiful message.”

Ferreira echoes this sentiment that the event facilitates different ways of viewing the industry, adding: “Here is about promoting handcraft and tailoring. Milan is for big designers, but in Rome there is an opportunity for people to understand Italian design from a different perspective.”

Despite the struggles Altaroma faces, (Quattrone cites “small budgets” and “locations being spread out and far away from each other”) both he and the wider industry commentators remain appreciative of Altaroma’s efforts: “I think they must continue to do it because it’s so important to support young creativity in Italy.”