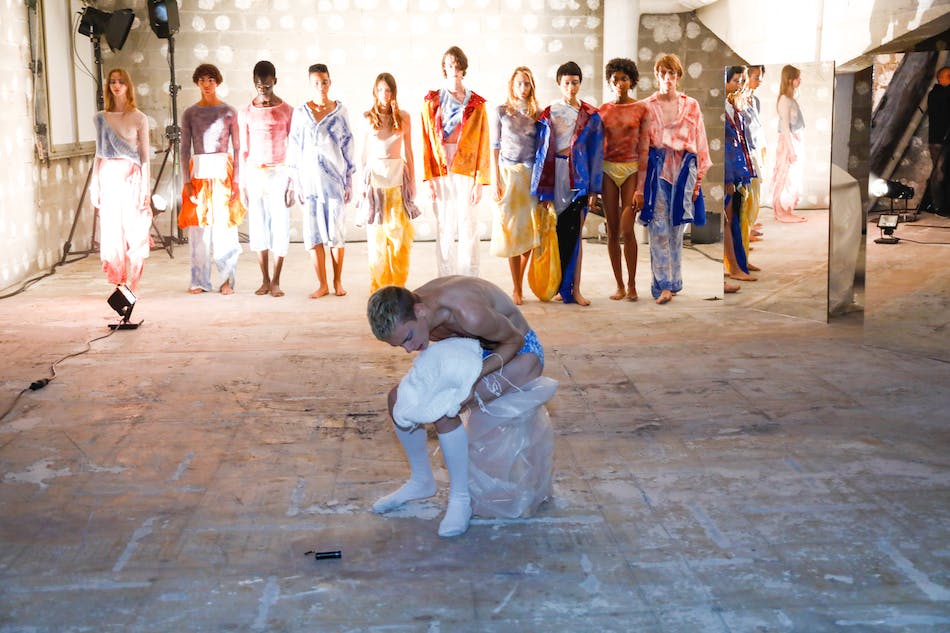 Branding designers by their location is becoming increasingly outdated in today’s nuanced global landscape, while group-shows seems practically geriatric. Yet this year, Fashion Farm Foundation (FFF), a non-profit organisation based in Hong Kong, alongside its HKFG programme supported by CreateHK and produced by Semeiotics, has somehow managed the impossible during Paris Fashion Week.

Taking place in the former Liberation newspaper office on rue Béranger in the heart of Paris’ lively upper Marais district, this event saw a markedly different approach from the Hongkongers. Instead of lumping together three brands in a single runway show, it hosted presentations from Ffixxed Studios and Ka Wa Key on different floors of what is now a rundown parking lot - a separate runway show from Anaïs Jourden to follow later next week. On an upper floor just below the balcony with stunning, almost 360 degree views of Paris, models informally showcased one look each from a further six designers - including Anaïs Jourden, Modement and Idism.

Fixxed Studios are no strangers to FFF and have shown with the organisation a number of times. Combining mens and womens for the first time this season, this presentation was a tongue in cheek affair in which models languished aimlessly around the homewear set in a homage to DIY spirituality. This season they experimented with the introduction of bright colours and florals which integrated nicely into their laissez faire, deliberately thrown-together aesthetic.

Given its history with FFF and the creative scene in Hong Kong, the brand is positive of these new changes in the format. “In the past we’ve done groups and I think it’s problematic but we lobbied really hard for this organisation to change the way they work,” says Kain Picken, co-founder of Ffixxed Studios. “But, with this amazing venue and because of the physical separation, it’s like going to see two different brands even though we’re on at the same time.”

Indeed moving up a floor in the steep, concrete building is like entering another world and this one the ethereal universe created by Ka Wa Key - newcomers to the foundation. “This is our first season with FFF,” Key explains before the show. “I think the Hong Kong Government is really supporting designers and this is incredible.” Based between London and Hong Kong, the brand collaborated yet again with artist Max Gershon in a intimate and powerful dance-based performance that drew on all the senses.

The brand’s first time to explore womenswear, it showing their LFW Mens collection with some additions for women this season. “We organically moved this way - some of our buyers buy for women, so it makes sense especially when we use a gender neutral approach to making garments,” adds co-founder Jarno Kettunen.

With Ffixxed Studios combining its menswear into women, and Ka Way Key blending the limits of gender, what is evident is how readily designers in China are adapting to changes in the industry, and this fluidity is echoed by organisations promoting Chinese designers.

“FFF find buyers and media, this is a really important opportunity for emerging designers”

According to Edith Law, chairperson of FFF: “Previously we held a group show and changed the format into a presentation. Of course, presentations have been around for a long time, especially in London, but this approach is relatively new in Hong Kong. And it’s being well received.”

Aries Sin, from Modement was equally positive of the efforts and changes these Government bodies are affecting. “Well, to showcase in Paris is not easy, it’s so expensive,” says the designer based between Paris and Hong Kong. "FFF find buyers and media, this is a really important opportunity for emerging designers like us.” She is the perfect example of what FFF want their support to achieve as she goes on to add, “I can use this [platform] as research or an experiment and just see how it goes. Maybe next season I can come back and do a presentation or a showcase.”

With many of these designers going on to showcase at next month’s Shanghai Fashion Week, Law is optimistic of the overlap between the two cities: “We are quite good friends with SHFW and Labelhood and they’re doing a phenomenal job. We hope Asia can attract and support talents together.”