What Richard Quinn Did Next

It’s just ticked over into the second half of 2018, but London designer Richard Quinn has already squeezed a few years worth of milestones into the last six months. Whether it’s receiving the inaugural Queen Elizabeth II Award for British Design from the monarch herself during London Fashion Week in February, or dressing Amal Clooney for the Met Gala in May, Quinn — already well known in fashion circles — has found himself a familiar name around the world.

The label is supported by Quinn’s one year-old public access print studio, which shares his studio space in Peckham. “We can offer unique options — almost like limited runs for stores,” Quinn explains of the studio, which he set up with the €50,000 prize money from winning the H&M Design Award in late 2016.

“We offer customer colourways to certain customers, especially to ones like Matches or Net-a-Porter, who do much bigger buys,” he says. Indeed, Quinn’s stockists swelled from 15 to 45 following his meeting with the Queen, bringing him to a whole new audience. For his newly found mass-market customer, he recently launched a collaboration with British high street retailer Debenhams. With a second collection already earmarked for next year, this is just one of the retail partnerships he’s taken on board this year — there more in the pipeline that he remains tight-lipped on. 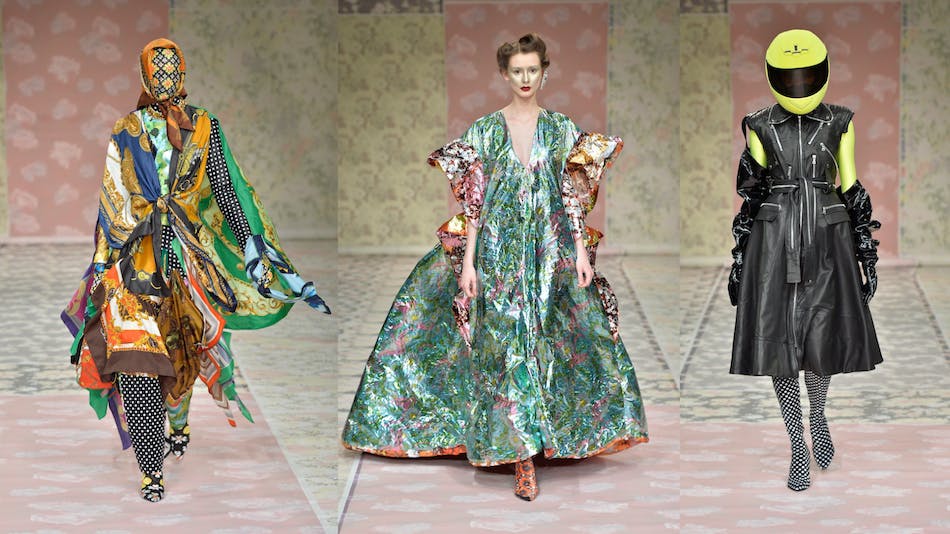 Building out the Richard Quinn world, a collaboration with MatchesFashion is also upcoming. Luckily, his bright florals translate across product categories — this time in the form of a homeware inspired collection. In addition, there is also the ongoing collaboration with London heritage retailer Liberty, creating bags with their rich print archives: “You can’t just do clothes anymore,” he rightly explains.

Supporting the local community is also on the agenda for Quinn, who insists on producing everything in his home city. “It just makes sense that if I’m from London, born in London and sell from London, that everything is made in London,” he says. “It makes it intrinsically linked with where I grew up, and I’m supporting a small factory 10 minutes from the house that I grew up in.” Supporting up and coming designers, Quinn was also a judge for Graduate Fashion Week's Hilary Alexander Trailblazer Award in June.

“We’re all about smaller companies growing with our company”

His print studio also adheres this collaborative outlook, having worked with fellow NEWGEN labels Wales Bonner and Charles Jeffrey Loverboy. “We do show samples for other companies, limited runs of production, and it’s where we do all our own production as well,” says Quinn. “We’re all about smaller companies growing with our company, and it’s nice when you can actually see them employ more people.”

Quinn’s pragmatic attitude to the industry is unflappable, even when — in the lead up to the Met Gala — Amal Clooney came knocking. “We have a policy: if you want something, come get it,” he says. “Amal was in Peckham to get that [outfit] — we did all the fittings and it was made there.”

Despite his modesty, the significance of the moment wasn’t lost on him. “The power of what we do and what we make in this studio, then seeing it a day later at the Met Gala, just shows you can do it yourself.” When Quinn says “the rest of 2018 will be really crazy,” he’s not exaggerating.