ORDRE caught up with Brooke Taylor, one half of Parisian-based design duo Aganovich, to talk ethics, rebranding, and the appeal of couture.

Parisian label Aganovich was born out of a classic love story: Once the founder of a hippie commune in France, Brooke Taylor moved to London and met Nana Aganovich, an MA womenswear student at Central Saint Martins at the time. They immediately hit it off, fuelled by a mutual love for fashion, which culminated with the founding of Aganovich in 2011.

Ticking all the boxes as a burgeoning fashion label, they debuted on-schedule at Paris Fashion Week that same year. “When we were on the ready-to-wear calendar, we featured in some of the biggest magazines, we had some of the best stylists on board, and we had leading shops like Maxfield, Ikram, and Isetan,” Taylor tells ORDRE. “We were basically working through a checklist of things that you’re expected to do to make it in the industry.”

Yet the effort required to maintain this momentum is often unsustainable and after seven years, the duo found themselves buckling under the pressures of crippling operational and production costs: “We were at the height of our sales, and on paper, it looked good, but we weren’t particularly happy with the direction of the brand, and the costs we were dealing with were phenomenal.”

"Every time we doubled our turnover, we tripled our outgoing costs,” he continues. Consequently, in 2017, the couple pulled out of the ready-to-wear calendar to focus on an overhaul. In addition, coming across a Netflix documentary, The True Cost - which pulls back the curtain on the real human and environmental costs of fast fashion - Taylor and Aganovich had another life-changing experience. The result? Their approach to design took on a more conscious path. “It was enough of a wakeup call that we wanted to do something about it. Not something that would impact the world per se, but it was more about doing our part towards sustainability,” he explains.

“We decided to rewrite the rulebook as it pertained to us. This set off a domino effect where we began to question our business on every level”

“When we finally started paying attention, we realised we were about to sail off a cliff,” Taylor adds. “We decided to rewrite the rulebook as it pertained to us, and rethink the brand. This set off a domino effect where we began to question our business on every level.” Thus, they launched Invisible Acts in 2017, a Kickstarter project exploring ethical production in fashion. Starting with making a simple workwear jacket, the initiative brought to light the hurdles faced when producing a fully sustainable brand. “Going organic and sustainable is far more complicated than it seems,” says Taylor. “It’s a long-term process, and you’re only going to win by millimetres as you try and convert your business. This project began as a conversation for us, a sort of litmus test that would inform the decisions for the rest of our collections.”

This new experimental direction naturally led the brand to enter the couture space for SS’19, a move Taylor feels is very much in line with their rebranded ethos. “Our ready-to-wear collections were already borderline couture, so this was a natural transition for us,” he says. “It’s fundamentally changed the spirit of the studio. The main difference is the freedom of imagination, and no commercial obligations.”

While the duo continue to sell their ready-to-wear collections and have even bounced back in sales since 2017, they now only host shows for their couture lines in the courtyard of their Parisian Atelier, presenting highly conceptual pieces featuring burnt, painted, electrocuted, and even bleached fabrics. “It’s taken us much closer to our original dream of running an atelier,” says Taylor.

Aside from couture, the brand is also experimenting with capsule collections. Their latest: a line of unconventional wardrobe staples made from deconstructed jersey t-shirts. “We decided to set ourselves a new challenge and got to work seeing what we could make using t-shirts as primary source material; sewing three together to make a dress, or flipping them upside down to make trousers,” he reveals.

Having previously landed top-tier concept stores like Dover Street Market, this brand repositioning caught the eye of retailers like H Lorenzo, L’Eclaireur, and Selfridges - Taylor believes the latter has opened up scope for the brand: “Partnering with Selfridges last year was a big move, as it helped us consider developing our collections for a broader appeal.” Already in its third season with the London-based store, he hopes to expand to international markets with similar retailers.

Stepping back from traditional models and following their own trajectory has, thus far, worked in Aganovich’s favour, so it’s no wonder the future looks positive for Taylor, who insists less is more when it comes to moving the brand forward: “We’re living in an extraordinary period in our lives and work, and much of that is down to the fact that we’ve stopped planning and stopped strategising. Reality becomes incredibly generous when you commit to enjoying your work and the people around you.” 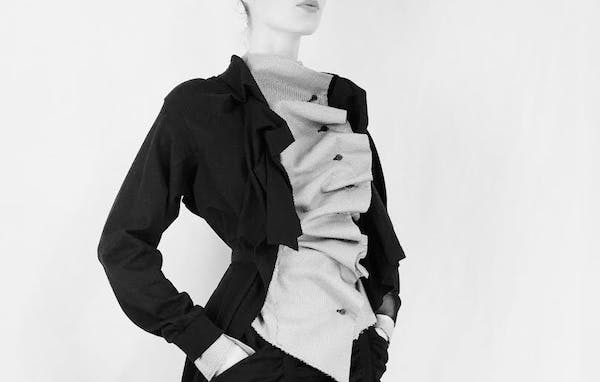