On the surface, WHM seems like any other other emerging, design-led, independent brand in China offering affordable luxury. But the reality is quite different: the brand, run by Wang Haoming, is supported by Zuczug, one of China’s leading commercial brands and retail disruptors in a move that is having real implications for the industry. “I’d been working in the design department of Zuczug for about nine years,” explains the soft-spoken Wang. “But it was always my dream since a kid to have my own brand, and then suddenly one day, they [Zuczug] decided I was ready!” His dream came true and in AW’17 WHM was launched.

“China is a very difficult market to approach as a single designer, so you need an investor or you join a platform,” Grace Maellaro, lecturer in fashion business at the Shanghai outpost of Istituto Marangoni, explains. “I personally see Zuczug as not a brand per se, but more of an innovative platform following an omnichannel business model.” Indeed Zuczug, operational since 2000, was started in Shanghai by renowned Chinese designer Wang Yiyang and is now a multi-brand platform dedicated to new lifestyles. The group encompasses a number fashion, sports and accessories lines (currently 6 in total) as well as its own select shop, In The Park, retailing 50% non Zuczug stock.

“In 2008 and 2016, the two strategic transformations gradually meant that Zuczug evolved from a designer brand to a multi-brand platform,” states a spokesperson for Zuczug. “This is our view of the market, and how we hope to meet the increasingly diversified market demands. At present, we have over 100 stores in the first and second-tier cities in China. Most of them are multi-brand stores, selling our brands and some collaborative buyer brands.”

Now the company is turning to an incubation model to cultivate and support talent — an entirely unique model for mainland China that could be likened to the Comme Des Garçons support system in Japan — WHM is the first designer brand from the group. With almost decade in a domestic design department, WHM’s Wang is certainly different and it’s easy to see why the brand fits so well into the Zuczug’s ‘everyday’ and ‘plain’ mould, with its quirky yet relaxed approach to design. SS’19 is relaxed, casual and accessible: “I’m inspired by daily life,” Wang says of crab claws that reference the “night food” of the city, crafted into jewelled accessories. His handbags have binder trimmings, inspired by flip-calendar, while labels and tags form a large part of the brand’s DNA appearing in scanned prints, replicated on knitwear or as uncanny, bobbing embellishments on delicate vest-tops. 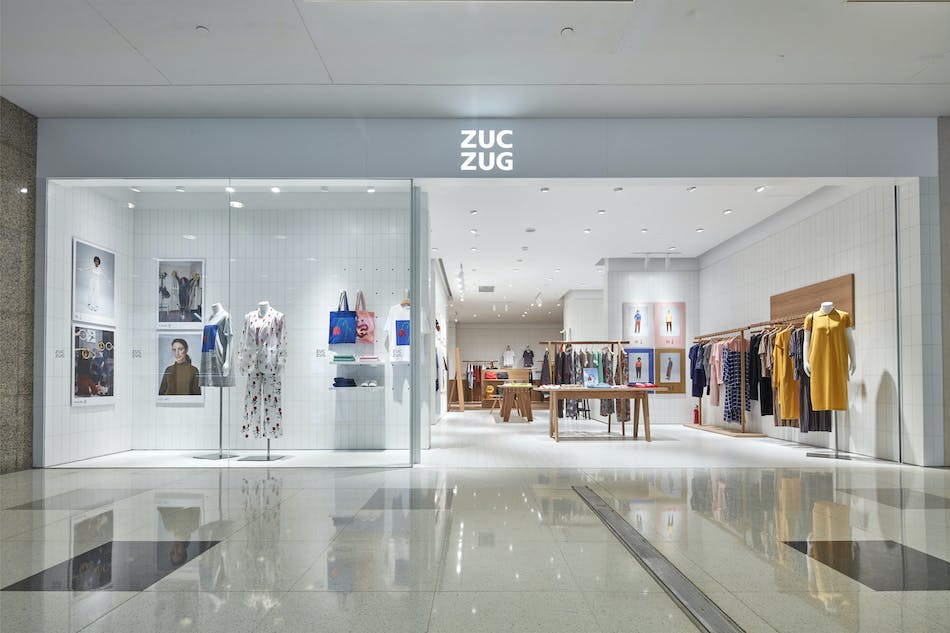 “Zuczug is working on a portfolio strategy,” says Michael Norris, research manager at Resonance, a digital and social agency in China. “In attracting younger consumers, I think creating a new label, rather than leaving current brand advocates in the lurch, is an appropriate move.” And this is certainly working: although only 4 seasons in, WHM now has 12 select shops in China while the brand is also sold in roughly 100 of Zuczug’s own stores. “WHM leans off Zuczug's physical stores and online sales channels,” Norris continues. “In addition, it's also found favour with specialty fashion shops dotted around the country like Nio Space and MDC.” Norris goes on to explain that from the off, WHM has been described as some as a younger version of Zuczug: “That suggests to me that Zuczug's influence may have been quite strong at the start.”

According to Zuczug, “We share all retail channels and also pay attention to developing a different retail strategy for all our market segments. Besides the traditional channels, we also find that the community environment is more suitable for this, such as our other independent brand "klee klee" which is sold on An Fu Road in Shanghai as well as our own e-commerce too.”

There are obvious benefits for Wang too, in particular in terms of production. “Now I can access the quality materials and manufacturing that my mother company uses and this is entirely down to the fact that they trust Zuczug,” he says. “It was going to be too hard for me to start on my own, but now, by being aligned with them, I can actually run a successful business.” In addition, as the group doesn’t do public, or industry-facing runway shows — only buyers ones — it can now tap this market with WHM which held a runway show recently during Shanghai Fashion Week.

Zuczug is not the only brand eyeing up young design talent in China — other commercial brands such as JNBY and cashmere giant Erdos are also looking to the independent sector for inspiration and this trend seems set to shake up the industry. Maellaro predicts this is a trend that will only grow in the coming years, stating, “It’s [incubation] something all good Chinese companies will want to follow in the future because you can’t forecast the market too much in advance — thinking about the next 5 years in China is already too long… As an entrepreneur you will never know what will happen, so it’s better to be flexible.”

Norris also affirms this thinking by adding, “They [Chinese companies] appreciate that growth doesn't last forever and generally take steps to initiate the next S-shaped growth curve. Incubation is one way to do that. In fashion, there's a clear tension between business and creative imperatives. Whether or not fashion labels are able to manage those tensions remains to be seen.” Zuczug’s representative summarises their take on the situation: “It takes a lot of time and cost to cultivate one or more brands. Maybe other brands will choose this path when the time is ripe.”